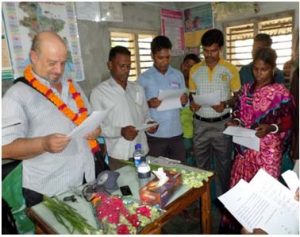 (a) Representative of Sundarban Adivasi Munda Sangastha (SAMS), whose mission is to rebuild the spiritual and social world with cultural and religious values of the Munda peoples in order to do away with the discrimination against untouchables, cast based discrimination and as well as poverty.

(b) Redaction of the Munda Barta (This news letter emphasis on the SAMS activities, any incidents of our area on Indigenous community, Indigenous Human Rights, our cultural activities, education, food security and climate change issues etc.), a newspaper published by SAMS and diffused among Munda villages in Sundarban area.

© Thesis at Khulna University, Department of Economic Studies: “Causes, Consequences of and remedies to poverty of the tribal Munda’s of the Sundarban Forest”.

At present, I work in Sundarban Adibasi Munda Sangastha (SAMS) as an Executive Director. SAMS has been established in 2003. In 2008, the Association has been registered at the Social Welfare Ministry and at the NGO Affair Bureau Bangladesh in 2011.

Focus areas of my organization’s work:

(b) Swift writing (Bengali and English).